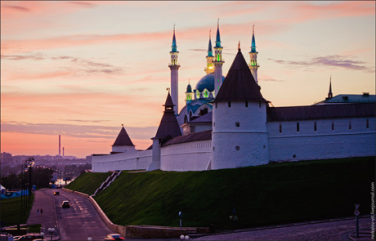 Population: 1,153,366.    Weather Now: Temperatures hit a record-setting  95F° on 9/6/16.     Kazan is a city of 1.1 million people, making it the eighth largest city in the Russian Federation.  The city sits on the Volga River about 620 miles upstream of Volgograd (formerly Stalingrad), scene of one of the bloodiest battles in human history.

Kazan is roughly the size of Dallas, Texas, and viewed on a map it is similarly in the middle of nowhere.  Just as most Americans don’t think of Dallas as a vacation hotspot (unless you’re singularly obsessed with the Dallas Cowboys), Kazan is primarily a workhorse in the Russian economy.  In fact, if the slightly-too-on-the nose Russian Helicopters website is to be believed, Kazan is home to a helicopter factory.  And not every city can say that.

Kazan’s location, on the Volga River right in the middle of Tatarstan, means that it has been a hub of trade and activity for hundreds of years.  Oh, and did I say Tatarstan?  Yes I did.  Because of potatoes?  Nope.  Because of the Turkic peoples known as the Tatars who live in this area.

I'm a long-time bureaucrat. I write about the environment, land use, urban public policy, National Parks, and a hodgepodge of other subjects. View more posts